I realize before I start this post I'm dating myself. Oh well…

I was having a conversation with a friend about the great 1980s commercial campaigns we remembered… There was the old lady on the Wendy’s commercials who said, “Where’s the beef?“ There was the Got Milk? campaign and, of course, the Folger's Best Part of Waking Up song. I literally used to rock out to the version of that Folgers song performed by Rockapella (you know, the a capella 'house band' on Where In the World Is Carmen Sandiego? - Don't act like you don't know them):

One campaign that will never go away for me is Tootsie Pop's "How many licks does it take to get to the Tootsie Roll center of a Tootsie Pop?" As a kid, I thought is was an odd question, because I know it would almost never be the same every time, if one Tootsie Pop is even a millimeter thicker or thinner than the next one, the size, wetness and technique of the tongue licking it, the variation of size in the actual Tootsie Roll chunk in the center, and on and on... It was such a curious concept that it did its job perfectly, because I still remember it. I think today’s “There’s no right way to eat a Reese’s” is a nice homage to that campaign.

So as I was thinking about the daily grind of sales, cold calling and following up with prospects, even months on end, it got me thinking about a similar question:

"How many prospect touches does it take to get to the signed contract (Tootsie Roll center) of a lead?"

Then the other day I stumbled across an article referencing that famous Microsoft study, showing how many customer communication touches it takes to finally close a deal (you've probably seen this in some form or another). In this case it’s actually a pretty predictable result, and it was eye-opening (and encouraging) to read these statistics again. So here they are now for you:

The diligent salespeople harvest the 'low-hanging fruit' at the fourth contact. After that, you are becoming 'top of mind' to a prospect, and after the 8th contact (at which point you are probably the only salesperson still reaching out), you have a 90% chance of being contacted when the prospect needs your services. Stop and read that one again too.

I decided to make an infographic… There just were't any out there that were 'sexy'... and they were all displayed going 'down' from Left to Right.. That's not how I would visualize success on a journey toward closing a client. The graph should be going 'up' from Left to Right, correct?

So the cherry on top feels so good, when you see these numbers prove themselves. I just had a prospect call me up, ready to purchase, and he was holding a proposal I gave him seven months ago… I had followed up with him through email and voicemails at least a dozen times through the process... so who do you think he finally called when his company was ready to pull the trigger?

Here's my spiffy Infographic to remind us all that it's about nurturing a relationship over time: 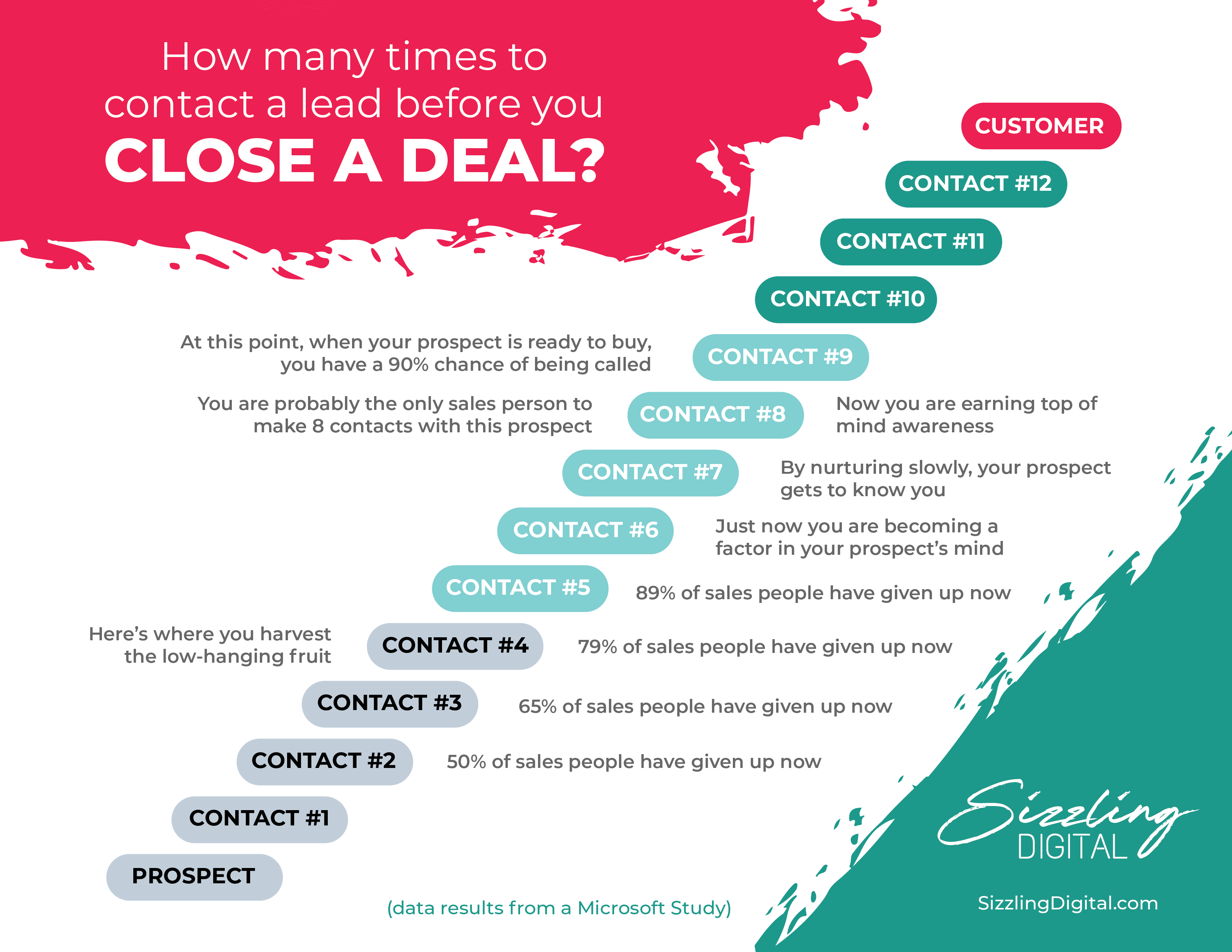 Start with a 10-minute call to find out how.
START HERE

We've talked with more than a hundred commercial cleaning companies, so we get it.